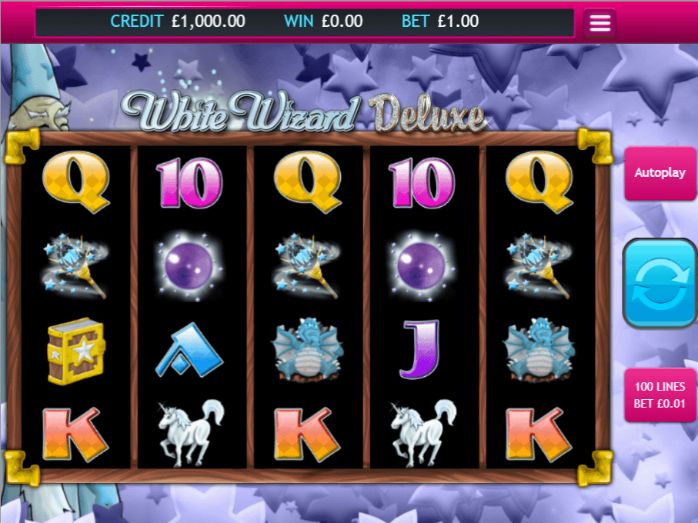 White Wizard Deluxe is a 5 reels, 100 paylines casino game by Eyecon. White Wizard Deluxe has WIld, Scatter symbols, Free Spins, Multiplier, Gamble, and Expanding Wild features, and an RTP of 95.5%. If you want to try White Wizard Deluxe, do it with us at Kong Casino, where you can also play more than 700 brilliant UK Playtech Slots such as Fluffy Favourites, Starburst, Rainbow Riches, and Mighty Kong.

You can always trust Eyecon to come up with cute, charming and witty themes, and when they do, they’re not afraid to throw in a sequel or two if one of their original creations does well! That’s been the case for the White Wizard casino game, which was first followed up by White Wizard Jackpot, and now has a further sequel in the shape of White Wizard Deluxe.

As the name implies, the theme of White Wizard is all about magic. According to the myths and legends that come along with any magical tales, there are two sides to being a magician, and they're a lot like the two sides of the force in 'Star Wars!' Black magic is evil and involves curses, hexes, and general acts of harm upon others. White magic is all about bringing positivity into the world. The friendly magician who presides over this casino game - and we mean that quite literally because he's forever present to the left of the reels - is a white wizard. That means he's on your side, and he'll prove it in the bonus features!

Graphically, this isn’t the most stunning of the UK casino games that are currently on the market. Eyecon can be a little hit and miss when it comes to their graphics, and although we wouldn’t say that this is a total miss, it’s very basic. Aside from the somewhat sketchily-drawn wizard, the background consists of magic stars, and the wooden-framed reels with their black background are a little vanilla, too. Fortunately, the substance in White Wizard Deluxe is worth more than the style.

If you're wondering what makes this casino game 'Deluxe' in comparison with the original, that starts with the layout. There's a five-by-four set of reels and rows, and they contain 100 ways to win. In both cases, that's an upgrade on the original. On the reels, you'll see the whole set of playing card symbols 9 up to A filling in as the low values, and then a glowing purple orb, a magic brush(?), a unicorn, a book of spells, and a bubbling cauldron which is presumably on loan from a witch. The friendly bearded wizard is on hand as the wild symbol, just as he was in the original game, and he'll use his powers to treble the value of any winning combination he helps to create. He can only turn up on reels one, three, and five. A little blue dragon is the scatter symbol, and can't be replaced by the wizard. Landing five scatters anywhere in sight will win you a payout of 300x* your stake, but the fire breathing lizard will also open up the bonus feature for you.

While there might only be one 'proper' bonus feature for White Wizard Deluxe players to play for, the casino game has a couple more tricks up its sleeve to keep players interested.

The first of those tricks is all about that white wizard wild symbol. As well as tripling your winnings each time he helps to make a winning line, he’s also an Expanding Wild. If it’s possible for him to create further wins for you by filling the whole reel he appears on, he’ll do it.

The second is Eyecon’s usual Gamble Feature. This is included in almost all of Eyecon’s UK casino games and works the same way in all of them. It’s a double or nothing punt, in which you stake the value of your last win against a blind guess between two options which the casino game will present you with. If you’re able to get it right, you can choose to repeat the gamble feature up to five times on the bounce, unless your total winnings hit £32,000*. At that point, you’d probably be best advised not to stake them on a 50/50 bet!

The real bonus feature you’ll want to trigger is the Free Spins feature, which is done by landing a minimum of three dragon scatters on the same spin. You’ll get fifteen spins for a trio of dragons, which isn’t bad at all as basic rewards go. That number jumps up to twenty* free spins for four dragons, and twenty-five for five. It’s possible for this round to be triggered again while it’s already in progress, subject to a maximum of fifteen consecutive times - although the chances of doing so are very low!

Unlike several other Eyecon UK casino games, there isn't a multiplier active during the free spins feature. You're not short-changed though; the trembling and expanding effects of the wizard wild symbol remain in effect throughout the free spins.

If you were in any doubt about how popular Eyecon is as a developer, consider this statistic; over the course of the past twelve months, casino games created by Eyecon were played more than six billion times. If you break that down minute by minute, that means that over eleven thousand games are played on an Eyecon game every minute. In the time you've spent reading this review, something like fifty thousand bets will have been placed, and someone's probably won big money! Although they formed in Australia in 1997, they've since opened an office in Guernsey, and it's from there that they primarily serve us with their UK casino games.

There aren’t hundreds of Eyecon casino games available, but when they do come up with something, their creations tend to stay popular for a long time. Their first-ever casino game, Temple of Iris, has been consistently popular since it was released - even though it’ll be celebrating its 20th anniversary in 2023! Although their catalogue is full of hits like Irish Luck UK Slot, Beat the Bobbies, Unicorn Bliss, Shaman Spirit and more, they’ll forever be best known for creating the Fluffy Favourites casino slot, which has remained among the top five most popular UK casino games constantly ever since it was released in 2006. They created a legend when they made that game, and they’ve been riding high on its success ever since.