Drop down in a lush, tropical jungle in Pragmatic Play’s Monkey Madness UK Casino Games, where the many chances to win real money are even more a‘peel’ing than the bananas the grow. The visuals and gameplay itself has a quality of a classic, retro slot whereby player will not feel overwhelmed by flashing animations or features. There is also a catchy jungle like tune that plays per spin. Higher pay symbols include a bongo drum, a toucan bird, bananas, and a monkey with a banana reflection in his sunglasses represents the Wild. Grab a vine and swing over the 3 reels, 3 rows, 9 payways, up to 100 continuous AutoSpins, a return to player that has an estimate of 96.53%, and a somewhat narrow wager span between 9p and £45. Monkey Madness casino slot is also great for mobile gameplay, as it has full compatibility on all systems and devices. The monkey is a very generous host as 3 of him swinging on the reels as a wild will award you a max prize of £5,000 on your total bet. While there is no Bonus round, the smaller reel grid gives a slight edge towards greater win combinations and being awarded that monkey wild jackpot or banana motherload.

Take a bow, clear your mind, and enter the martial arts dojo in IGT’s Monkey Prince UK casino slot, where you and your primate sensei get your literal kicks with plenty of opportunities for major payouts. The backdrop of the reels hints that the secret dojo is nestled in a Japanese mountain side, as rocks and trees can be seen, and the monkey prince himself stands sternly beside the reels waiting to show off his impressive skills. Visually, Monkey Prince casino slot is very immersive, especially when the symbols come alive with movement or the monkey prince attacks the reels for wins. On top of this is a soothing Asian style backing tune to help you reach a state of zen. Symbols consists of a golden dragon and lion, a bluish ring with a jewel, an earring, a golden ring, a greenish trinket, a Wild logo, theatre masks, and a reddish door Scatter. There are 5 reels, 4 rows, 60 ways to win, an RTP up to 96.16%, and a huge wager span between 60p and £1,800. When 5 masks fill up a collection meter, the monkey prince leaps onto the reels and kicks out Wild wins – from giant Wild symbols to Wild stacks, depending the mask’s colour. 3 or more Scatters activates the Bonus that allows you to choose between a combination between Free Spins with a certain multiplier. This goes from up to 50 Spins with Wild features.

Go bananas for the multiple ways to win incredible rewards in Blueprint Gaming’s Monkey Business Deluxe Online Slot. The reels themselves are bordered by bamboo and they are surrounded by green leaves and thick jungle foliage. The higher valued symbols are of a lion, a bird of the tropics, an elephant, a green-scaled snake, a zoologist with a mustache Scatter, and a Bonus symbol. The jungle path leads through 5 reels, 3 rows, 20 ways to win, up to a 96% RTP, a great mobile slot gameplay, a max 100 uninterrupted AutoSpins, and a wager range from 20 to £200. A special gold Wild can randomly land on the reels to create a complete stack payout formation. 3 or more of the zoologist Scatter on the reels will launch the Bonus with 10 Free Spins and a max x4 multiplier for every win. There is a total of 12,500 coins to be won as a top prize. As with other Blueprint titles, there is a Jackpot King features that randomly activates for major potential wins. 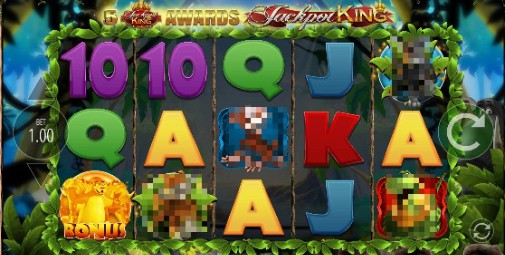 Escape to an island paradise in the tropic when you spin the reels of Blueprint Gaming’s King Kong Cash UK Slot, where the exciting rewards on offer grow faster than the delicious bananas. The cartoon and comical graphics and symbols of King Kong Cash casino slot is somewhat reminiscent of the famous video game Donkey Kong. The crowned Kong snoozes next to the reels among ancient jungle ruins and can either award special payouts in his dreams or wake up to send prizes to the reels. The symbols are of a logo, a cigar smoking rhinoceros, a tiger with a piper wearing glasses, a yellowish bird, an alligator, a Scatter, and a wood barrel Wild. There are 5 reels, 3 rows, 20 payways, a 95.79% RTP, up to 100 AutoSpins, and a wager range between 20p and £200. Whether asleep or awake, Kong can randomly trigger a number of features that send Wild wins to the reels, creating matching symbol payout, locks a winning spins payout combination for a respin, and nudges the Bonus round. 3 or more Scatters activates the Bonus with a rewards ladder for 1 of 5 features, that you can gamble to move up each rung. These involve barrel matched symbol wins, playing a vintage Donkey Kong game for awards, expanded reels, and a special spin (on 5 and 40 reels) for a super spin with Wilds. There is also a Big Monkey Bonus that can win you a x1,000 multiplier.

Ascend to the ‘ape’x of a mountain in Asian where a mythical primate sensei awaits your arrival in Legend of the Golden Monkey Casino Slot, as you will not only learn how to split a banana with your bare hand but spin for major potential winnings. Behind the reels appear a misty mountain range, with a couple pagoda-type buildings perched at the top and the reels themselves are set against an ornate temple with swaying red lanterns (especially when clicked on) and koi fish carvings. The symbols are of a dragon cup, a bowl of coins, an old parchment scroll, an ornate shield, a vial of an elixir, a bejewelled crown, monkey acts as the wild, a Scatter/bonus symbol, and a treasure box. Display your martial arts skills over the 5 reels, 3 rows, 25 payways (paying both ways from left to right and vice versa), an estimated 96.1% RTP, a max 1,000 uninterrupted AutoSpin, and a wager span between 25p and £125. The monkey master can randomly appear on reels 2, 3, and 4, and kicks Wild wins that remain stuck for subsequent winning spins. The reel 3 Wild remains locked for a minimum of 3 spins. A reel 5 treasure box can open to award a maximum 1,000 coin win, with the chance to launch the Bonus. 3 Scatter symbols trigger the Bonus of Free Spins and up to a 5,000 coin payout. There are 3 choices to pick that involves a combination of up to 10 Free Spins with special Wilds that can appear stuck and/or stacked on the reels during the round. A reel 5 treasure box can also reward 1,000 coins or 2 extra Spins. 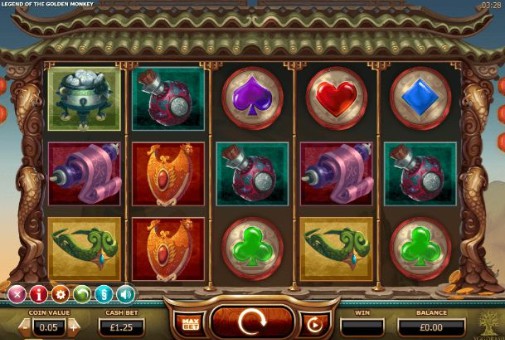