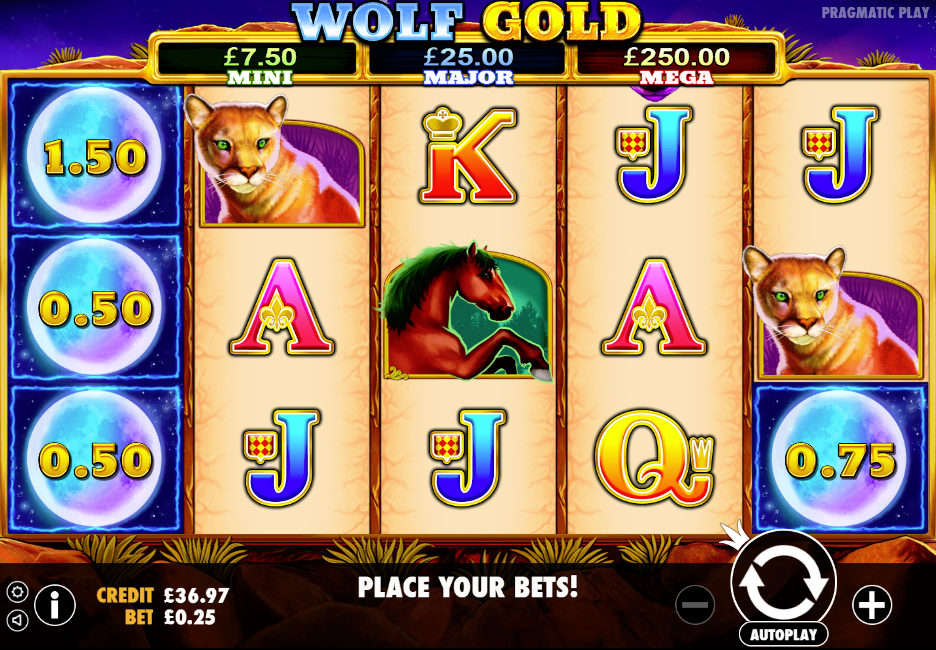 Wolf Gold is a five reel, 25 payline casino game by Pragmatic Play. Wolf Gold has Wild, Scatter symbols, Free Spins, Respins, and Jackpot bonus features, and an RTP of 96.01%. If you’ve come looking to play Wolf Gold, you’re in the right place at Kong Casino, where it’s one of more than 700 great UK Playtech Slots we offer to our players. That collection includes Fluffy Favourites, Starburst, Rainbow Riches, and Mighty Kong.

Trying to take money from a wolf in real life probably isn’t a great idea. They’re likely to scratch, claw, and bite you, and they probably don’t have much money to give you in the first place. On the other hand, taking money from wolves in the world of UK casino games is a lot of fun, thanks to the creative minds of Pragmatic Play! Wolf Gold, released in 2017, is an award-winning game which has been among the most popular on Kong Casino ever since we launched.

One thing that this casino game isn't short on is the atmosphere. The setting for Wolf Gold is the haunting prairies of North America, where wolves prowl, howling at the moon. The quality of both graphics and animation here is strong, and you get a sense of the Native American mysticism that the game is trying to convey. Wolf Gold doesn't try to be too clever, too complicated, or too overwhelming in the way that it's presented; Pragmatic Play casino games have a classic feel to them, and with Wolf Gold, they've pitched the tone perfectly.

The good looks of this casino game help with the creation of its eerie atmosphere, but the effect is topped off with a backing track of pan pipes, which are somewhere between 'soothing' and 'anxiety-inducing.' They're interlaced with the distant cries of wild animals; it would seem that the wolves aren't alone in these canyons - and that's confirmed by the symbols which land on the reels!

Starting at the bottom with the symbols of the lowest value, we have the royal set of playing cards. That's J to A, for that keeping count. Above them are quite an exotic bunch of creatures; you'll see horses buffalo, eagles, and what might be a Jaguar or a lynx. It's a wild cat of some kind. For all the things we know about casino games, we're a little lacking in animal identification skills. Sorry! The wolf of the game's title puts in an appearance as the wild symbol, and he can replace any other animals (and the playing cards) to make you a winning combination. There are two further symbols; a scatter which is represented by an image of the canyons during the daytime, and a full moon which is called the 'money symbol.' To give you a thorough understanding of what those symbols do for you, we should talk about the Wolf Gold bonus features.

There are a few different approaches that a provider can take to bringing bonus features to a casino game. They can either cram them full of fabulous features - as we often see from Blueprint Gaming's range of UK casino games - or they can take a more laid back approach and put a strong emphasis on the quality of what's already there. There isn't a right or wrong approach, but Pragmatic Play invariably favors the latter way of going about it. We only have a couple of bonus symbols to play with in Wolf Gold, but they both add to the game.

The first bonus on offer is a Free Spins round, accessed by landing three scatter symbols on reels one, three and five. Your reward for doing so is a miserly five* free spins, but don’t despair! For all five* spins, the middle three reels will only produce colossal 3x3 symbols, thus (hopefully) making it easy to land large wins - perhaps even one on every spin!

The Money Respin and Jackpot Bonus features in Wolf Gold are connected, and both of them involve the moon bonus symbol - also known as the 'money symbol.' Land six of them on one spin, and every single other symbol on the reels will disappear, while those six symbols lock into place and freeze. You now have three free respins to find more moon symbols. Every time you do, you get another spin, and the new moon symbol also locks and freezes. Filling the reels with matching money symbols will land you the maximum jackpot that Wolf Gold offers, which can vary, but will be clearly displayed on the screen. Even getting close is very lucrative - all of the money symbols have a value printed on them, and that value is yours when the feature ends. That happens one of two ways - either you land the jackpot, or you run out of spins while trying to land it.

While not being complicated, Wolf Gold has won a massive audience of UK casino games players by offering a perfect balance between traditional presentation, great atmosphere, and genuinely worthwhile bonus features. If you’ve never given it a try, you owe it to yourself to find out why everybody raves about it!

There are two genres and themes that Pragmatic Play visit more than most - the American Old West, and animals and nature. In Wolf Gold, they combined the two things together, so it's no wonder they've had so much success with it! They've since repeated the trick with 2019's Mustang Gold, which isn't an 'official' sequel to Wolf Gold but does have multiple features in common. If we started listing off every casino game that Pragmatic Play is responsible for - even if it were just the animal-themed ones - we'd be here for a very long time. There are currently over 150 UK casino games available which bear the Pragmatic Play logo. They're consistently one of the most prolific providers in the business.

As well as being known for their 'old meets new' range of casino games Pragmatic Play have also developed a reputation for being great at making games that work with the mobile format. More of us are now playing using our phones than ever before, and some developers have struggled to convert their most popular games into mobile-compatible equivalents. Pragmatic Play doesn't have that problem - their design process starts on mobile phones, and they don't make the laptop or desktop version until they're happy they have the mobile version right.

We’ve got plenty of the Maltese company’s best UK casino games available here at Kong Casino; Mustang Gold is probably the next one to check out after Wolf Gold, but also have a look at Gold Rush, Great Rhino Slot Game, 7 Monkeys, and Chilli Heat Online Slot to get a feel for the full variety of their talents.