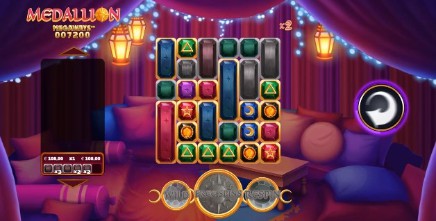 This game is a Megaways style, meaning there are larger design features complete with impressive variance features, plenty of bonus features and unlimited winning potential. Anything you can ask for in any Playtech Slots is offered here - free spins, unlimited progressive multipliers, a super generous betway pattern and the chance to win big and bet small.

As a rather unique game developed by a respected and popular developer, this game is based around a Middle Eastern theme. You are taken inside a large tent set beneath the stars of a desert setting at night, complete with sparkling visuals and pops of gold. This megaways game shows some great winning potential, through a super generous betway pattern and a fairly flexible design. This game shows 6 reels in total, which is filled with between 64 and up to 46,655 ways to win. With so many paylines on offer, it can almost feel hard not to make a winning payline combination. The RTP rating is set to 96.2% in this game, perfectly promising for a medium to high variance Megaways game. As part of the game engine, this casino game also uses an Avalanche mechanic which removes winning symbols from each spin, causing an avalanche to the reel to encourage multiple paylines in a row.

Medallion Megaways is all about the multipliers, with rather basic payouts on offer with bonus features designed to boost them. In fact, the maximum win of the main game is a very low 50x* your stake, although this can be increased significantly throughout the game. This casino game UK has been known to payout up to 23,360x* your stake, a huge difference to be made through the advanced bonus features of this game. This is all down to the super generous progressive multipliers, which are potentially unlimited in this game.

This UK casino game is very fast paced and full of magical features, as the overall game mechanic can feel like a bonus feature in itself. Alongside this, and some super high potential payouts, this game can also offer a Free Games Feature to give you 10* free spins, the use of expanding wild symbols and a progressive multiplier starting from 1x*. As well, there is a Void Respin Feature which removes low value symbols, adds wild symbols and repsins the reel to re-calculate your odds of winning a jackpot. Finally, also look out for the medallion symbols as collecting these can trigger all bonus features and unlock high potential wins.

Medallion Megaways is a middle eastern themed UK Playtech Slots developed by Fantasma Games, set in a picturesque star-lit desert at night. Created as a modern game, this is full of HD graphics and stunning graphics which take you to a Middle Eastern desert setting through golden medallion symbols and the backdrop of a tent set beneath the stars. You can play this themed game on your choice of desktop or mobile devices, here at KongCasino.com.