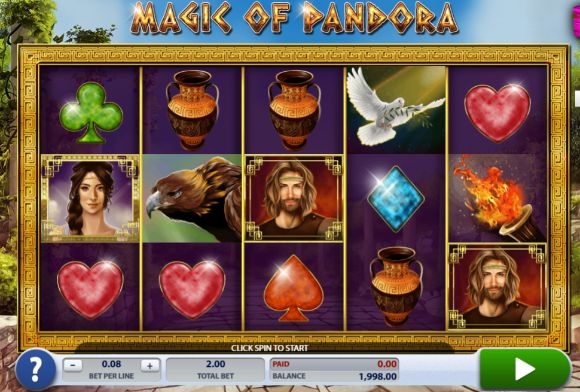 Magic Of Pandora is a 5 reels, 25 paylines casino game by 2by2 Gaming. Magic Of Pandora has Wild, Bonus symbol, Free Spins, and Reel Modifier features, and an RTP of 96.05%. We’re happy to bring you Magic Of Pandora here at Kong Casino, which also plays host to more than 700 other great UK Playtech Slots, including Fluffy Favourites, Starburst, Rainbow Riches, and Mighty Kong.

Casino Site With Magic Of Pandora

We’ve got a whole collection of Greek legend-themed casino games here at Kong Casino, but the majority of them focus on the great Gods. Zeus, in particular, sees a lot of the action! In Magic Of Pandora, an equally-important but lesser-seen figure of Greek myth is taking center stage, and that’s Pandora. Those of you who know your Greek folklore will be aware that she was accidentally responsible for bringing sin into the world by opening her famous box. We’re not entirely convinced that was her fault - the Gods have some questions to answer for leaving it in her care to begin with! Plus, once upon a time, gambling was seen as a sin. If we have Pandora to thank for the existence of UK casino games, then we’re happy to give her the spotlight!

2by2 Gaming has given her quite a spotlight to work with. This is a beautifully designed casino game, taking place in the outdoors of a garden during the summertime. The styling is very solid, the animations are good, and the visuals are HD-sharp. The only minor let down is the strange decision to use gray boxes to house all the buttons, which feels a bit retro, like something from an old version of Microsoft Windows.

The reels take up most of the space on the screen, and on them, you'll find the four playing card suits to represent the low values, each of them colored differently to help you tell them apart. Once we move past them, we find that everything else you can spin and land is drawn from Greece; we have an amphora, a white dove, a burning torch, a man with a beard who may or may not be a Greek God (he's not identified by name, but it could be Zeus in his younger years!), and, of course, Pandora.

As Pandora is so strongly associated with the cursed box she opened, you'll be seeing plenty of that inside this casino game, too. As a starting point, it serves as the game's wild. That can replace any of the base game symbols to help you complete the game's 25 paylines, but won't substitute for the bonus symbol, which is helpfully labeled 'BONUS,' and as the name suggests, has a function within the bonus features. There are a few of those, all of which make good use of the theme, and we'll take a look at them in more detail now!

Magic Of Pandora Bonus Round

The bonuses on offer within this casino game can be grouped into two categories; reel modifiers, and a formal bonus game. The reel modifiers happen at random during the base game, but you have a little more control over them when you trigger the primary bonus feature. As a combination, they’re cleverly designed, and work well together.

Your clue that something special is happening in the base game comes along when Pandora's Box makes an appearance. We don't mean the wild symbol; we mean a second appearance of the box which is separate to the reels. It has no specific trigger, so it may or may not happen on any spin of the reels. That means you're always in with a chance of something good happening to improve the way the game is going for you, even if you've had no luck for a few spins. When the box does put in an appearance, it will have one of three effects.

Wild Reels are one of those possible outcomes. When this effect is granted, either one or two of the reels will be completely stacked with wilds, and they’ll stay wild for your next spin. Any of the reels can turn wild, so if you’re lucky enough to stack the first two reels, you’ll be looking at big wins!

The Extra Wilds feature doesn’t result in stacked reels, but it does mean there will be a randomly-generated amount of additional wild symbol on your reels next time you spin, and so a boosted chance of landing a win.

The Extra Paylines feature is one we haven’t seen in too many other UK casino games; it doubles the number of paylines in operation for the next spin, giving you fifty in total.

While any of the above features are welcome bonuses, their impact is somewhat diminished by the fact that they only stay there for one spin. All of that changes, though, when you trigger the main bonus feature that the Magic Of Pandora casino game has to offer. That’s Free Spins, and you might get up to sixteen of them, depending on how many bonus symbols you can land in one spin. Three of them is enough to get you awarded eight*, and then twelve* spins for four bonus symbols, and sixteen* if you can land all five. You can’t re-trigger the feature once it’s started, but if Pandora’s Box decides to show up while the free spins are active, you’ll be granted a further four.

Before your free spins begin, you have a decision to make! You can choose any of the Pandora’s Box reel modifiers to play with, and they’ll stay in place for the duration of all of your free spins. The appeal of having multiple free spins with one or two wild reels is obvious, but doubling up the paylines is a good way to make sure you’re landing wins regularly, too. If you can’t pick between them, we have even better news; you can split your free spins up, and divide them between the features. What could be fairer than that?

Being able to tailor your bonus feature like this is probably the best thing about Magic Of Pandora, it makes this casino game stand out from the competition. Open up the mystical box yourself, and see what it holds for you!

While 2by2 Gaming isn't one of the bigger-name UK casino games developers out there, they're experts in the field with a lot of experience. They tallied up the number of years that all the senior staff of the company has been working in the casino industry between them, and that figure comes in at over 120. That's a lot of professional time, learning, and skill development! The American company hasn't had a lot of exposure to the UK market, but all of that has changed thanks to their partnership with Microgaming. Microgaming's reach is huge, and allows 2by2's creations to reach a global audience - including right here at Kong Casino!

The Chicago-based company is an inventive thinker when it comes to casino game design, as is obvious from the way in which you can build your own bonus feature in Magic Of Pandora. We don't have a massive number of their games to offer you at this point in time, but we'll hopefully see their partnership with Microgaming bear more fruit, and we'll have more of their range here sometime soon.