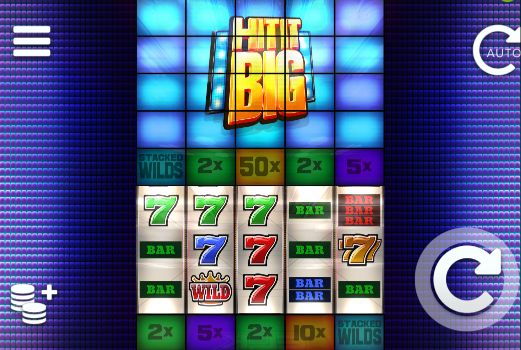 Hit It Big is a 5 reels, 5 paylines casino game by Elk Studios. Hit It Big has Wild, Bonus Symbols, Multiplier, Bonus game, Stacking symbols, and Respins features, and an RTP of 96%. If you want to try to Hit It Big, do it with us at Kong Casino. We also have more than 700 other great UK  Playtech Slots to offer you, including Fluffy Favourites, Starburst, Rainbow Riches, and Mighty Kong.

Casino Site With Hit It Big

It's fair to say that game shows are big business in the UK; they dominate the daytime television schedule, and there's a whole TV channel dedicated to them in the shape of 'Challenge.' While some game shows have been adapted into the casino game format - Who Wants To Be A Millionaire being one of them - you don't often see a developer trying to play with the format and come up with a fictional game show as the theme for a casino game. Elk Studios have decided to give it a try with their April 2019 release Hit It Big, and we think they've done precisely what the name of the game suggests. This is an inventive, highly original, and potentially very rewarding game.

Where it succeeds most is that it's got so many more layers than you'd initially suspect it to have. The presentation is quite basic, and there are only five fixed paylines to play for, so you'd expect it to be quite a traditional and reserved casino game. It isn't. From the moment you first hear the booming voice of the game show host, you know that you're in for something a little different! There are a couple of well-known shows which have been used as source material here, although we think 'Strike It Lucky' was probably chief among them. The location for the game is a game show studio, and Elk has taken a thorough approach to making sure that everything looks just as it should do.

When it comes to basic symbols within this game, there are only a few. You'll be seeing plenty more in the bonus features, but we'll come to those in a moment! On the 5x3 reel set, which is squashed into the bottom of the screen a little untidily, you'll find a bar, a double bar, and a treble bar as the least valuable offerings, followed by a green seven, a blue seven, a red seven, and then a golden treble seven as the pick of the bunch. On top of all of those is a wild symbol - represented by a crown bearing the word 'WILD - and that can substitute for any other symbol apart from the various bonus symbols to create winning lines.

The bonus symbols in Hit It Big are so heavily integrated with the bonus features that it’s impossible to describe one without the other - so let’s check them out right now!

Hit It Big Bonus Round

The gameshow format of Hit It Big really comes to life within the bonus features and offers you an experience quite unlike any UK casino games we’ve played recently. There are multiple ways you can enjoy some bonus fun here, and that starts with the Reel Game Feature.

Each of the reels in Hit It Big has two 'feature' buttons; one positioned above the reel, and one below it. The label on those buttons changes from spin to spin and can have a number of different effects, but those effects are only triggered when the button above the reel matches the button below it. If, by chance, you've managed to land matching buttons on more than one of the reels at once, you'll get the benefit of both of those effects at once! There are four possible outcomes to watch out for.

The first is Locked Wilds which, as is suggested by the name, is a sticky wild feature with a twist. The first land last reel is wholly stacked with wild symbols, and they'll stay where they are for the next three spins. The spins are free, which also makes this a re-spin feature.

The Stacked Wilds feature is similar but isn't quite as good. It only affects the reel it's on, and the wilds only apply to the spin you've just taken. Even so, it can lead to some nice additional winnings.

If you land Re-spin, then all the reels will spin again once. Basically, this is just a single free spin, and therefore isn’t all that exciting.

Multiplier is far more exciting because it’s an instant cash prize. Those prizes range from a better-than-nothing 2x* your stake to a nice, chunky 50x* stake payout.

The Hit It Big Bonus Game is triggered by landing three 'Hit It Big' logo symbols, and is the primary feature of this casino game. A series of prizes are displayed on the big screen, all of which are disguised as standard gameshow prizes (it'll feel a bit like playing 'The Generation Game.' Behind each of those prizes is a multiplier. A marker will flit between all the prizes rapidly, and all you need to do is press 'stop' to win whatever prize the marker lands on. After you've collected that particular prize, it will be replaced with a red-faced 'Bandit' symbol. Try not to land on those - they end the feature!

There are also some 'up' arrows on the screen. If you land on one of those, the prizes on offer will 'level up,' which increases the value of the multipliers. There are three levels in total, and in the top one, the best multiplier available is 1000x* your stake. Beware of the 'down' arrows though - they'll drop you back down to the previous level.

Hit It Big really does feel like you're taking part in a game show without leaving your house, and it can be a pretty generous casino game when you get into the bonus features too. We're giving it top marks for originality - and also for being a great game in general!

Elk Studios haven’t been around for all that long - they first opened in 2012 - but they’ve started catching our eye with their original ideas for UK casino games, and their exceptional graphical and presentation skills. Hit It Big isn’t all about the graphics - and isn’t supposed to be - but check out their casino game Chi Online Slot if you want to see what them at the peak of their design powers. You’ll find it in our Kong Casino library.

You'll find the head office of Elk Studios in Stockholm, Sweden - which is also where you'll find the much-larger Net Ent - so there must be something magical in the water of that particular city! Although both companies take a similar approach to the way their games look, there's no direct connection between them that we're aware of. Elk is especially proud of the skills of their mathematicians, who create all the functionality behind the good looks of their creations. There haven't been too many Elk releases into the UK casino games market just yet, but as they grow in confidence and output, we'll likely start to see more of them. If they're all up to the standard of Hit It Big, we can't wait.