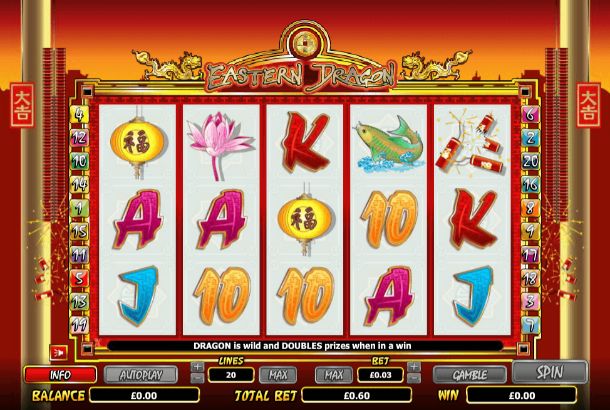 This interesting, well presented game would love you to join the fun it provides in the Far East. Vividly coloured, this game offers a low to medium variance and twenty pay lines on five individual reels.

Game developer NextGen released their take on the Far East, ‘Eastern Dragon’ on the 2nd of October 2013. With a background that depicts an ancient Chinese village, ‘Eastern Dragon’ pays keen homage to many Chinese symbols of luck and prosperity, the dragon itself, which creates the games title, is a Chinese symbol of good luck. The slot uses regular numerical and alphabetical symbols (9, 10, A, K, Q and J) but also uses many images that just scream the Far East, and which are heralded in Chinese belief and folk law. Although this Playtech Slots is clearly showing its age in terms of its very basic visuals, it still has plenty of playability. Many people may be deterred by the basicness of the visuals which offer little animation except for a colour change from red to purple with entrance into a free spin, however, if you are able to raise above merely looks, there is a nice little game to be found here.

The Chinese symbols featured include Ching Gold Coins, which are a symbol of prosperity for the Chinese, and acts as a scatter bonus when revealed on the game, the pretty Koi Carp which, when you line up five give you fifty times your stake, Paper Lanterns, Lotus Flowers and Firecrackers. The game will reward you for lines of between three and five of the regular number or letter symbols, but the Chinese symbols of the Koi, Lotus, Ching Coin, Lantern and Firecracker require just two matches for glory. ‘Eastern Dragon’ has a good RTP (return to player) rate of 95.01% and offers both online games and mobile play.

The software that supports the Eastern Dragon slot game is developed by NextGen. NextGen is a leading game development company providing gaming solutions to both online and land-based casino operators worldwide.

As the Far East and especially China, with its rich vein of tradition and customs, Oriental-themed online line slots are popular and widespread. More similar themed games like Dancing Dragon Spring Festival Slot by Playson, Micro gaming’s Dragon Dance also one of the most well-known and popular games in a similar vein to ‘Eastern Dragon’. Those games are more of a celebration of the ever-popular Chinese New Year celebrations as it focuses on the huge, decorative dragons that dance around the streets, but does provide a lot of similar imagery as ‘Eastern Dragon’. But then again, Red Drogen Online Slot by 1x2 Gaming, if it’s a little dragon action that you desire, check out ‘Dragon Master’ also developed by NextGen.

Whilst not exactly jam-packed full of bonus features, ‘Eastern Dragon’ does offer a few nice little extras. The aforementioned scatter feature which is provided by the symbolic Ching Gold Coin, itself offers a decent doubling up of all your winnings once activated and in addition to this, the lucky Dragon symbol will act as a giver of free spins. If you are lucky enough to spy the Dragon on reels one and five simultaneously you will be rewarded with fifteen* fiery free spins and a trebling of your initial stake. Further to this, any form of the win within your, now purple, free spin screen with reward the player with a tidy six times multiplication of their stake and the opportunity to re-trigger their free spin.